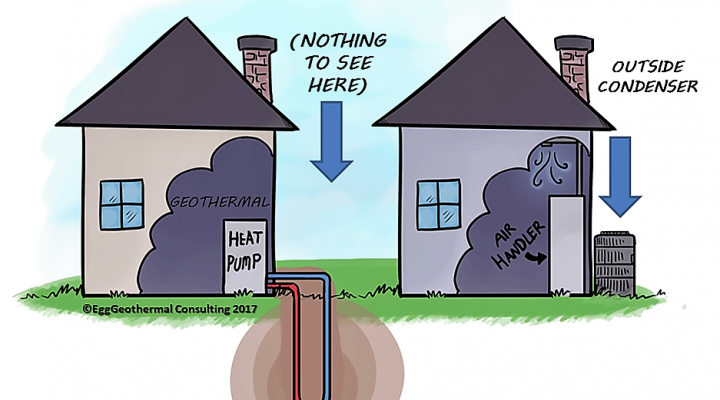 When I saw my first mini-split, my interest was piqued by the oddly slim condenser.

I concluded that essentially, someone had taken a through-the-window type of heat pump, and “split” it into pieces. That is fundamentally correct. Most have added features such as a wireless remote-control and thermostat.

Soon, multiple evaporators entered the scene. These are typically known as Variable Refrigerant Flow (VRF) systems, and have the capability of coupling several indoor units to one outdoor unit. This was viewed by many as an engineering marvel; previously, refrigerant systems had been unable to vary the refrigerant flow to multiple inside coils and fans that provide the heating a cooling. Variable refrigerant flow systems seemed to have mastered that. With these multiple systems came the ability to pipe refrigerant from one or more common compressor sections to every room of a building, then install multiple inside units that would serve each of the defined zones. As this “VRF” industry began to take hold, I first asked myself, is it really safe and efficient to run refrigerant lines all over a building? For generations, buildings have operated with hydronic* HVAC distribution, which is a way of saying that a water-based liquid is circulated through the building. *(“Hydronic” implies a system in which water and a prescribed percentage of heat transfer fluid is run through pipes, and is used to transfer or deliver heating and cooling) Is it more efficient to pump refrigerant around a building, or does water work better? The correct answer is water. Take a look at the chart above. This has been answered conclusively by the Hydronics Industry Alliance in this video. It has a lot to do with refrigerant velocity requirements, refrigerant phase change, and other important roles refrigerant plays in the Carnot Refrigeration cycle. You can learn more here (view video from 4:20 – 9:00 for animated explanation of Carnot Cycle) if you have a mind to understand it better. Suffice it to say, keeping that entire charge of refrigerant in a factory sealed unit is probably the safest and most efficient solution; think of your refrigerator. A factory sealed refrigeration system such as a heat pump: Beyond the efficiency of a hydronic based system, geothermal systems are ground-coupled. An air source heat pump must work with whatever the temperature is outside. That’s the reason for the higher energy consumption of the air source heat pumps in the ASHRAE building in Atlanta.

The ASHRAE Headquarters is two stories with similar conditioned areas on the first and second floors, and was designed with a geothermal HVAC system on the 2nd floor (15,558 sq. ft.), and a variable refrigerant flow (VRF) system on the 1st floor (18,226 sq. ft.). The building has a Dedicated Outdoor Air System (DOAS) for supplying fresh air to both floors.

For a little history, in 2008, ASHRAE’s Headquarters went through a major remodel with the object in mind to evaluate sustainable building energy performance. Included were improvements such as lighting, solar PV and insulation. In order to facilitate reporting of performance, an array of more than 1600 sensors to monitor HVAC performance was installed in the building. Data loggers have been used to provide historical data, and they continue to provide data today. With all of that data available, it was only a matter of time…

In 2013, a research team from Oak Ridge National Laboratory (ORNL) and Oklahoma State University (OSU) were contracted to evaluate the performance of the HVAC systems at the ASHRAE building. Xiaobing Liu, PhD, and J.D. Spitler, PhD teamed up to crunch the data. These researchers have been studying the relative performance of VRF and GHP that control the temperatures in the ASHRAE building.

The real question is what happens if the refrigerant pipes leak for any reason? In a refrigerant based piping system, there are a wide variety of health and human safety concerns. Refrigerants can displace oxygen, a matter of critical importance. It’s illegal to run refrigerant lines through common areas of multi-family dwellings in NYC (1107.2.1 Refrigerant Piping in Public Corridors). In water based hydronic systems, the long proven method, if a pipe has a leak, the result is not a threat to humans. While uncomfortable, inconvenient, and “wet”, water is not a dangerous thing.

Also, refrigerants are a concern in global warming, and have been assigned a Global Warming Potential (GWP) rating based upon their contributions to GHG emissions. The refrigerant industry is in a scramble to create the next generation of refrigerants to meet guidelines for reduction. The new refrigerants that are being produced for heat pumps have reduced their potency in global warming, but also have created a whole new set of safety concerns. The refrigerants we’ve seen emerge also have a combination of flammability and toxicity danger (ISO 817 Classes). These new problems make it more important than ever to keep refrigerant lines outside of dwellings, and inside a factory sealed package.

Speaking of safe, in the heat transfer fluids that are mixed with the water in the hydronic lines is just about as safe as the water itself. Until recently, Propylene Glycol was used, because it’s safe. However, it gets just as thick as molasses at cold temperatures, increasing pumping energy and reducing capacity.

Thanks to the hard work of NYSERDA (re: PON 3519), safe and efficient heat transfer fluids are being proven as the better alternative. Kilfrost GEO significantly reduces viscosity at cold temperatures, protects the environment, and saves pumping energy. Protection of the environment is what we are about. Heat transfer fluids that are safe for the earth are every bit as important in the solution as a low GWP (Global Warming Potential) for refrigerants. In the “What Else” category is the proprietary nature of the communication between the pieces of equipment with regard to multiple components. Then the modulating expansion valves and related hardware are also proprietary, making them unique to the brand.

On the other hand, water based hydronic system use standard pumps, valves, fittings, and water based heat transfer fluid. It’s a tried and true standard that our workforce is used to, and will serve us well for generations to come. This video shares these concerns if you’d like to see first-hand.

Geothermal is the Masterpiece of Heating and Cooling Technology

Geothermal systems are the finest heating and cooling systems available. This is something we can do for our planet, for our children and for theirs.

Interested in getting geothermal for your home? Click the button below to see if your home qualifies: