“We’re Really Happy We Made The Switch” 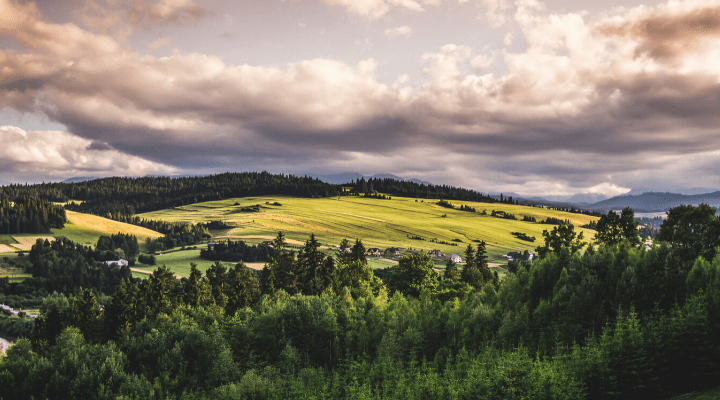 Homeowners Russ and Amy have had a Dandelion geothermal system installed in their barn in rural Albany County for nearly two years now. We talked with them about their experience with the installation process, how the system has coped with hot summers and cold winters and how they were able to save even more money by adding a solar array to power their geothermal system. The following interview was edited and condensed from a Facebook Live interview.

Let’s talk about the space we’re in because this is a pretty unique building.

Russ: We’re sitting in what we call the Octagon Barn in Knox, New York. It’s a little unusual to heat and cool because it’s 1200 square feet, which isn’t too much, but it’s got a 35 foot ceiling. It’s more of an event or community space than a home.

What were you using to heat the space before you installed Dandelion geothermal?

Russ: Before installing Dandelion, we had a propane forced hot air system. We’d use it between about April and December. We’d wouldn’t turn it on in January, February and sometimes even March because it cost a couple hundred bucks a week to heat the space. It really wasn’t affordable at all.

Besides that, we had no cooling system. You’d think that up here in Knox (NY) it’d be nice and cool in the summer, but that’s really not true.It’s pretty uncomfortable. Sometimes in the summer, it was so stuffy indoors that we’d hold meetings outside. One nice thing about getting the Dandelion system is it comes with air conditioning.

How long have you had the system?

Amy: We installed Dandelion Geothermal December 24th, 2018. So we’ve had it for over a year now.

How has the system performed?

Amy: Very well. In the summer, the air conditioning worked great. During the winter, we keep the temperature low but turn it up for our events. It’s actually not the ideal way to use geothermal. You have to plan ahead and heat up the space gradually because the system doesn’t use combustion. It gradually introduces warm air to the space.

Speaking of combustion, let’s talk about the heating system you replaced.

Russ: You really are burning money [heating with fuels]. Propane was prohibitively expensive, and the propane company was very difficult to deal with…

And we’re not naming names here.

Russ: Right. Well they would say, do you want automatic delivery, or are you going to call when you need a refill?

Russ: And the less you use, the more they charge you per gallon. We had all kinds of problems with it. When the propane company finally came and hauled the tank away, we should have had a party with balloons! And the cost of the geothermal system, you know the loan…

Amy: It saved us money. Even though we’re purchasing a new system, we’re spending less money than what we were spending on propane in the winter.

Russ: And no air conditioning, and no warm water. So we really got a lot out of this.

How much were you spending on propane? And how does that compare with financing a Dandelion system?

Amy: Oh, we were paying several thousand dollars a year for propane. And now, with geothermal, we have an arrangement with Enerbank that Dandelion set up for us where we had two loans: a bridge loan for the amount we anticipated to get back as a tax rebate…and then a second loan where we pay $135 for an extended period. We’re saving money because we’re not buying fuel. That propane bill replaced by $135/month feels good.

Russ: So in the meantime, we came across a good deal in terms of purchasing photo-voltaic panels, so we’ve had 9,000 watts of solar panels installed.

Amy: But we’re generating even more than we need.

And you can use that free electricity to power your geothermal system.

Russ: Right, with the solar panels, we’ll have free heating and cooling.

Amy: And we’ll be able to charge our cars!

Does that mean this is now a net zero structure?

Amy: It will be, we just got the solar installed a week ago.

Russ: I think we’ll not only be net zero, we’ll be net plus because we’ll probably produce more electricity than we need.

Tell me about the process of installing geothermal.

Russ: There are a number of things that had to be done. The best plan for us was to drill two wells. Thankfully, we already had duct work. If you don’t have ductwork, and you want Dandelion Geothermal, you’ll have to put that in. After drilling, they installed the geothermal heat pump.

Russ: Installing geothermal involves multiple people. The guy who drills the well isn’t going to be the same guy who installs the heat pump.

Amy: Dandelion took care of all those arrangements. Our experience was really simple, we just communicated with Dandelion. They came and did everything. We had a fixed price that we agreed on at the beginning. It included the installation, and any tweaks were all covered.

Russ: It’s a beautiful thing because it feels like it happened by magic. You’ve got all these people coming and going, doing things you need them to do. When it’s all over, you have this financing arrangement, so you’re never being nickeled and dimed.

Amy: And you also have remote monitoring on your heat pump. After we had the system installed, we got a phone call from Dandelion that said “we’ve noticed a little problem with your system, there’s a small adjustment to be made.”

We weren’t even aware of it, but they came out and made the adjustment. It just felt really good to have that oversight.

Right, that’s a unique thing about a Dandelion system.

That really opens up the possibilities given that you were paying more than that just to heat with propane before.

Amy: Right, and not to have air conditioning too.

Russ: So when you think about geothermal compared to, say, an air source heat pump, geothermal makes all kinds of sense. Because the temperature coming out of the ground is fifty one degrees. If you had an air source heat pump, you’d be warming the air from like zero to twenty degrees outside, but now all we’re doing is warming up from fifty one degrees. It’s a huge difference.

You’ll never need a back-up fossil fuel to help you along.

Russ: I’m surprised that there isn’t some legislation that would require new homes to be built with geothermal. Because when you think about it, a total heating system for a new home must cost $20-30 thousand. So if you took that money and applied it to geothermal, you wouldn’t have fuel delivery trucks or gas lines running to your house.

Amy: And all the dangers that come with that. With all the combustion that’s going on inside your building, with the carbon  monoxide threat.

Yeah, with no combustion you’ve removed that carbon monoxide threat from your home.

Amy: Well, we’re really happy we made the switch.

You know somebody else who has a Dandelion system…

Russ: Yeah, we just had a Dandelion system installed at our daughter’s house in Guilderland which was really in response to the system we have up here.

Russ: And the challenge there was that it was unoccupied for years, so the pipes froze. She was looking at $25,000 to install a new heating system, or she could go geothermal. Long story  short, we just activated the [Dandelion system], and it’s working beautifully.

Amy: It’s really unobtrusive. You hear the air movement, but it’s not loud.

Russ: It’s a happy noise. Your house is getting warmed up!

Amy: And you’re not burning and fuel oil or propane, no fossil fuels.

Russ: And for our daughter, she had two 750 gallon oil tanks that we can now remove because she’ll never need another oil delivery. Which is a beautiful thing.