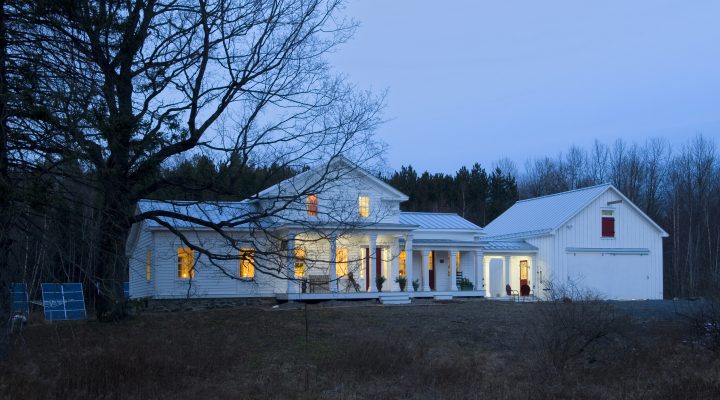 Paul and Joanne Coons have a gift for seeing what’s possible.

In late 2009, a real estate developer in Clifton Park, NY appeared before the town’s planning board to lay out all the difficulties he’d had trying to sell the Peters-Lockrow House, a dilapidated, Greek Revival-style farmhouse originally built in 1852 that had sat vacant for 10 years.

“The previous owner had literally raised turkeys in the kitchen,” homeowner Joanne Coons says. “There were holes in the roof, and in some of the areas, the ants had gotten in and destroyed the home’s columns. It was a timber-constructed building, with wooden columns that that had been chewed up to sawdust. The rain came in through the holes in the roof and froze the sawdust.”

The developer had listed the house for sale, but wasn’t getting any takers. Prospective buyers had been wary of taking on a major renovation.

Three years before, the town had added the 2,100-square-foot house to its Register of Historic Places, which meant the developer couldn’t bulldoze the home, despite its condition. After working out a deal with the town, the developer lowered the home’s listing price, on the promise that the new owners would do as much as they could to preserve its original character.

The Coons stepped up, with a vision of not only restoring the house to picture perfect condition, but turning it into one of the most energy efficient homes in America.

Today, the Peters-Lockrow House is certified as both a LEED Platinum and NAHB Certified Green Building Emerald home, has won a handful of green building awards, and has been photographed for a number of magazines and newspapers.

Solar panels generate all of the home’s electricity needs, and a geothermal heat pump installed by Dandelion installation partner Aztech Geothermal handles the home’s heating and air conditioning–a must in upstate New York.

The Coons started by spending months meticulously assessing the home’s condition, and working with designers to plan out energy efficient features that maintained its historic look.

With financing in place and approvals in hand, a construction crew began demolition, pulling out the rotting columns, and restoring the damaged foundation. They ripped out design elements from a previous owner’s 1960s-era renovation, like a drop ceiling in the living room, and discovered delightful architectural features like the home’s original tin ceiling.

In restoring the walls and roof, the Coons opted for soy-based foam insulation and a period-appropriate metal roof with airtight insulation. A three-ton geothermal heat pump saves the couple an estimated $2,400 per year on HVAC costs. In the winter, the Coons keep the house at a steady 70 degrees Fahrenheit, and in the summer, they keep the house at 76 degrees.

In the backyard, a small array of rooftop and pole-mounted solar panels generate 10.6 kWh of electricity per year, enough to power the whole house, and charge their all-electric Nissan Leaf and plug-in Toyota Prius hybrid. They’re currently in line to buy a Tesla Model 3.

The Coons’ electric bill is just $17 per month, which covers the power company’s monthly service fee to remain connected to the grid. The town of Clifton Park lowered the Coons’ bills even further, granting the property a 95 percent historic tax easement on town, county and school taxes for 25 years.

For the Coons, their home in upstate New York is the latest chapter in a long history of sustainable living. In 2002, Joanne, a high school environmental science teacher, spent $350 to buy a diesel car and the couple began making their own biodiesel from restaurant waste.

They even experimented with burning their homebrewed biodiesel at home, to help offset the roughly $4,500 per year it took to heat the house they were living in at the time. Paul described the near-constant process of collecting grease and processing it into biodiesel as an all-consuming obsession.

“In the design process [for the house in Clifton Park], we thought, ‘There’s got to be a better way,’” Paul says. “That’s when we found ground source heat pumps. To me, that’s the best of both worlds.

“You can heat and cool your home with the power of the sun, and you don’t have to keep fueling the system by going around and collecting grease from restaurants or chopping wood. To me, the combination of solar and a ground source heat pump is the ideal way to do it.”