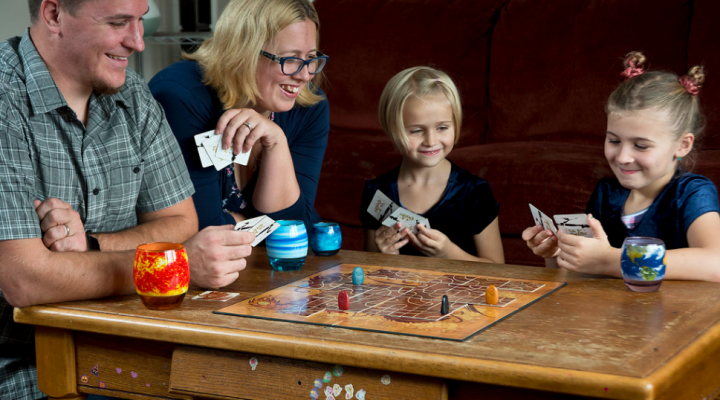 It wasn’t long ago that Matthew VanDerlofske and his family relied daily on fossil fuels and conventional electricity.

Like most Americans, they spent hundreds of dollars per month gassing up their two SUVs, burned $1,600 worth of oil each year to heat their 1,660-square-foot home, and pulled about 15 megawatts of electricity each year from the grid.

They’ve installed 56 solar panels on the roof of their home, and are replacing their oil-based furnace and window-mounted air conditioning units with a geothermal heating and air conditioning system from Dandelion.

And they’ve done it all in less than five years.

“I went to school when there was a big concern about the ozone layer, and I grew up with the idea that burning fossil fuels was a bad idea,” VanDerlofske, 35, said. “Later on, after the big gas price spike in 2008 and 2009, we were budgeting $600 in gas per month for both of our cars, which is quite a bit of money. We decided then we were going to start weaning ourselves off fossil fuels.”

That started in 2012, when the family bought their plug-in Chevy Volt and spent $6,700 to put in 32 rooftop solar panels. Those two decisions alone cut their monthly gas budget down to $200, and reduced their monthly electricity bill by 60 percent.

Last year, they installed an additional 24 solar panels, and now produce more electricity than their home consumes, which they return to the grid. Earlier this year, they bought their first all-electric car. For the family, installing renewable heating and air conditioning represents the last piece of the puzzle toward achieving energy independence. VanDerlofske and his wife plan on staying in their house for many more years, and say they like having the ability to essentially eliminate their monthly energy costs.

Geothermal heating and air conditioning systems use the steady temperature of the earth just a few feet underground to more efficiently heat and cool your home. Depending on the size of the house, homeowners routinely save somewhere between $25,000 and $75,000 in energy costs over the life of the system.

Matthew recalls first learning about home geothermal while watching a show on the Discovery Channel back in 2005, before he bought his first house.

He revisited the idea later, after an unusual spike in New York heating oil prices resulted in a $4,000 oil bill one winter. At the time, a local company gave VanDerlofske a quote of $45,000 to install a geothermal system in his home.

“I really wanted to do it, but I wasn’t ready to invest that amount of money at the time,” he said.

That changed this summer, when he heard that Dandelion was offering geothermal systems for $20,000 (after a geothermal rebate from NYSERDA). The company spun out of X, Alphabet’s research and development division, and offers lower installation prices by using more efficient drilling techniques and uniform pricing.

VanDerlofske, who works as a senior software engineer, said he and his wife thought about installing an air source heat pump, which uses the ambient temperature of the air to heat and cool a home more efficiently than traditional HVAC systems.

They ultimately decided against the air source heat pump, for three reasons: “We wanted the hot water tie-in, which decreases the cost of making hot water, we wanted the greater efficiency of the geothermal system, and we really didn’t like the idea of the mini splits, these little fan-operated units that go in each room,” he said.

“What really sealed the deal for us was the price,” he said. “The air source heat pump system was $15,000, and for $5,000 more, we could go to a full geothermal system, with the knowledge that even on the coldest days in the winter up here, we didn’t have to worry about switching to a resistance heater.”