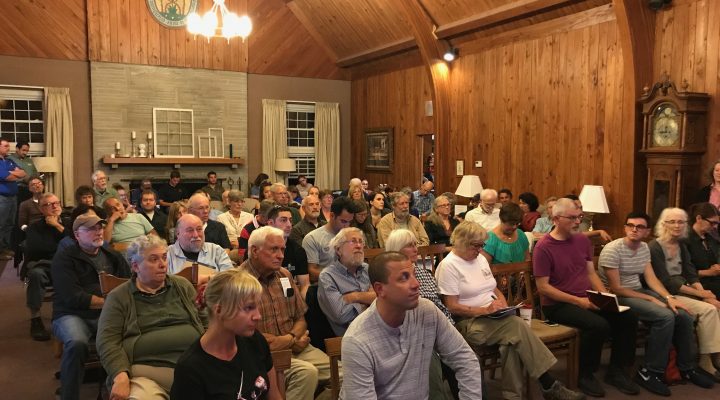 Geothermal expert Jay Egg this week kicked off his three-month tour of New York state with a packed, hourlong Q&A session in New Paltz. Some 80 people squeezed into a large meeting hall at the New Paltz Reformed Church on Tuesday to get a detailed primer on renewable heating and air conditioning.

Heating and air conditioning consume more than half of a home’s monthly energy needs. Combustion-based heating systems, those powered by oil, propane and natural gas, are a significant source of greenhouse gas emissions.

In 2015, New York Gov. Andrew Cuomo laid out an energy plan that promised to reduce greenhouse gas emissions across the state by 40 percent from their levels in 1990 by the year 2030.

Most people still have no idea there’s a safe, affordable, eco-friendly alternative to traditional heating and air conditioning systems, Egg said. When the average homeowner decides to “go green,” they typically invest in better insulation, install solar panels and buy an electric car. Investing in the last piece of the puzzle, renewable heating and air conditioning, is crucial to truly reducing your home’s carbon footprint, he said.

Geothermal systems use the ambient temperature of the Earth to generate a year-round supply of renewable heating and air conditioning. The system requires a dedicated appliance called a ground source heat pump, which runs on technology more commonly found in kitchen refrigerators.

In 2012, the Florida chapter of the Sierra Club moved its operations into the state’s first “net zero” commercial building, in St. Petersburg. The building’s heating and air conditioning are handled by a geothermal heat pump, and its electricity needs are generated onsite, using rooftop solar panels.

Last year, Egg checked in with the chapter’s senior organizing manager, who said they were “extremely happy” with the building’s geothermal HVAC system four years after installing it.

It’s estimated some 50,000 geothermal heat pumps are installed in the U.S. each year.

The event this week included a number of Hudson Valley-based solar and geothermal installers, including Dandelion, which met a New Paltz homeowner who signed an installation contract with the company days later.