The History of Geothermal Heating & Cooling 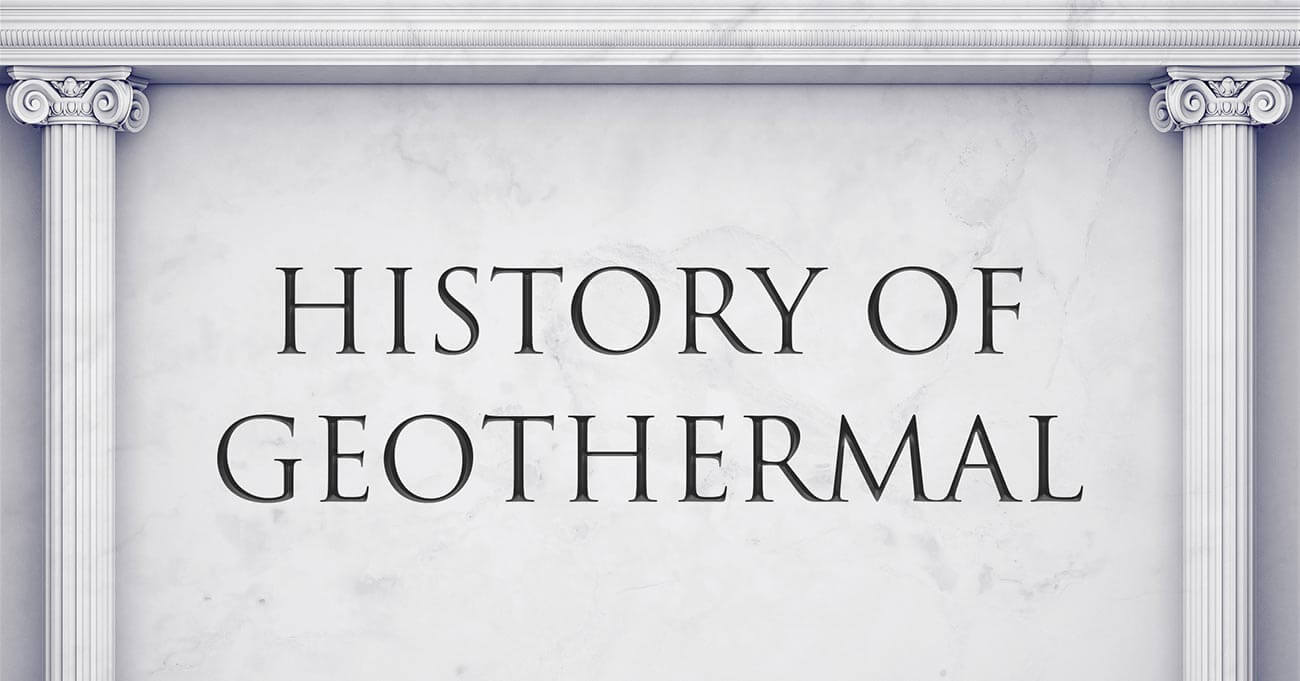 Describing how geothermal heating and cooling systems work can make it sound like science fiction. After all, you’d think that some kind of futuristic technology would be required to harness renewable thermal energy underground to heat and cool homes at anywhere from 300-600% efficiency.

Humans have been using the principles behind geothermal for centuries and the basic technology that powers geothermal heating and cooling systems, or ground source heat pumps, has existed since the late 1940s.

In fact, Western European and Nordic countries have been converting homes en mass to geothermal heating and cooling since the 1970s. In 1980 alone, Germany installed nearly 25,000 geothermal home heating systems, and today one in every five homes in Sweden are warmed by a ground source heat pump. In the US, a recent study by the Department of Energy found that as many as 28 million American homeowners would save big on heating and cooling costs if they upgraded to geothermal today.

So if geothermal is the most efficient and often the most cost-effective way to heat homes and the technology has been used for decades, why isn’t it more common?

To really understand why, you’d need to look at the whole history of heat pumps, but the short answer is cost. Installing a geothermal system is a major investment, and while it can save most homeowners thousands of dollars in the long run, it has traditionally come with a steep price tag upfront. Fortunately, Dandelion’s innovative technology, business model, and financing tools are “disrupting the geothermal energy space,” making it more affordable and accessible for homeowners than ever before. To find out how Dandelion has shifted the status quo, let’s zoom out and take a look at the historical context of geothermal home heating and cooling.

From Cavemen to Lord Kelvin

Archeological evidence shows that humans were harnessing thermal energy over 10,000 years ago. Early humans must have understood the fact that the earth holds a steady temperature year-round because, as the name “cavemen” suggests, they used underground caverns to keep cool in warm weather and stay warm in cold climates. Archeologists have noted that cave-dwelling persisted past pre-history and into the ancient world as people in places as disparate as ancient New Mexico and Turkey developed large ‘cave cities’ to keep comfortable and store food at a consistent temperature.

In (slightly) more contemporary times, Bavaria’s original beer gardens kept their kegs cool by storing ice year round in cellars dug underground. Even after refrigeration ended the practice of ice cellars, brewers still used deep cellars to keep their beer at a consistent temperature. Nearly two hundred years ago, America’s oldest brewery, Yuengling in Pennsylvania, employed nearby coal miners to dig “beer caves” that stored freshly brewed beer underground at around fifty degrees through hot summers and cold winters. Those “beer caves” are still in use to this day!

The first theoretical application of geothermal as we’d know it today came about at the height of the Scientific Revolution. In the mid-18th century, Scottish physician William Cullen used a pump to demonstrate the possibility of artificial refrigeration. A century later, British engineer Lord Kelvin used that innovation to theorize that the refrigeration process could work in reverse and laid down the concept of the modern heat pump. A few years later, in 1857, the Austrian Peter von Rittinger developed the first working heat pump and in 1912, Mexican-Swiss engineer Heinrich Zoelly filed the first patent for a geothermal, or ground source heat pump in Switzerland.

From Theory to Home Heating

The earliest “geothermal” heating systems could more accurately be called “hydrothermal” because they used river water as a heat source. In the 1930s, Zurich’s town hall building harnessed thermal energy from water flowing in the Limmat River to provide heating and cooling. Given that river water temperature fluctuates, and can even freeze over, the limitations of the technology are quite evident. It wasn’t until the 1940s that American scientist Carl Nielsen of Ohio State University developed the very first true ground source heat pump for use in his own home.

Nielsen’s ground source heat pump still used water, but his system harvested thermal energy from groundwater where temperatures are consistent. By tapping into that steady, renewable heat underground, Nielsen’s system was able to keep his home comfortable with heating and cooling year round. Across the country, researchers built on these developments and in Oregon the very first commercial geothermal system was developed to provide space conditioning for a fourteen story building in downtown Portland in 1946. Like Nielsen’s home heating system, Portland’s geothermal system utilized ground water as a heat source. Today, we’d call that an “open loop” geothermal system, we’ll talk a bit more about ground loops a little later.

In the most favorable circumstances, Zurich’s 1930s “hydrothermal” experiment provided space heating and cooling at over 200% efficiency. Not bad for a technology that was introduced at a time when people were still burning coal and sawdust to keep warm. Better yet, the American geothermal systems of the 1940s boasted an operating efficiency of over 400%. While the core principles of geothermal technology haven’t changed much since then, further innovations in installation would make ground source heat pumps even more efficient, affordable, and accessible to everyday homeowners.

From Oil Crisis to Decarbonization

America’s post-war boom was powered by cheap fossil fuel. In 1964, you could fill up your family’s Ford Galaxie with gas that cost just $0.30 a gallon. The same principle applied to home heating: coal and sawdust had given way to fuel oil, which was cheaper than ever, while more and more homes were outfitted with even cleaner and more efficient, natural gas hook-ups. All that changed in the 1970s, when the oil-producing Arab countries constricted global fuel supplies in response to the Yom Kippur War prompting the 1973 and 1979 “oil shocks.” Overnight, the price of fossil fuels skyrocketed, sending the American and European economies into a deep recession. One of the consequences of the oil crises of the 1970s was a reexamining of technologies that could free homeowners from the wild ups and downs of the fossil fuel market.

At Oklahoma State University, researchers developed the first truly successful “closed-loop” geothermal systems. Closed-loop systems install piping underground that circulates a water-based solution that absorbs the ground’s thermal energy. Unlike the “open-loop” systems of the 1940s, closed-loop systems don’t rely on groundwater and are built to last; a closed-loop system can operate for up to 50 years without any maintenance! That said, the first successful ground loops were installed as “horizontal” loops and required lots of land to work properly. Today, most geothermal systems utilize “closed” loop systems to provide heating and cooling, but further innovation would make the technology even more accessible.

Meanwhile in Europe, Austria, France, Germany, Sweden, and Switzerland invested heavily in home geothermal systems to reduce their dependence on fossil fuels. In 1980 alone, Germany installed neatly 25,000 residential geothermal systems and in 1982, over 50,000 French homes upgraded their homes with heat pump technology. In 1980, a Swiss firm used plastic pipes to install the first “vertical” ground loop, a closed loop system installed straight up and down that required only a fraction of the space needed for a horizontal loop system. This innovation would open up geothermal technology to homeowners who don’t have Oklahoma-sized properties to work with.

Today, the oil shocks of the 1970s pale in comparison to the challenges posed by climate change. According to Green Tech Media, geothermal will be “a key technology for decarbonizing the roughly one-third of global energy consumption that goes toward heating buildings.” Governments understand this too, and in recent years local, state, and federal governments have scrambled to offer generous incentives for homeowners to upgrade to geothermal. Currently, homeowners can claim a 26% federal tax credit to install a geothermal system while New York State offers generous cash rebates through local utility providers and Connecticut homeowners can qualify for thousands in incentives.

Geothermal has been the most efficient way to heat and cool homes since the 1940s. Despite the oil crises of the 70s ramped up commercial production of ground source heat pumps, the cost of installing a geothermal system has often been prohibitive. That’s where Dandelion comes in. Originally conceived at X, Alphabet’s innovation lab, Dandelion’s mission is to make geothermal heating and cooling affordable and accessible for homeowners.

According to TechCrunch, Dandelion is “driving down the cost of installing geothermal systems” through a groundbreaking business model and innovative technology. Dandelion uses software to design geothermal systems to fit each home’s individual needs, and the proprietary Dandelion Air heat pump is designed to be low maintenance, cost-effective, and super-efficient. In terms of installation, Dandelion specializes in vertical ground loop systems, which require relatively little space and allows the company to operate at scale, further driving the cost of installation down.

Since 2017, Dandelion has emerged as one of the largest geothermal providers in the country, helping hundreds of New York and Connecticut homeowners go green, save money, and live more comfortably. The company’s goal is to install up to 10,000 homes a year. Last year investors like Bill Gates’ Breakthrough Energy Ventures put $30 million towards making that happen. Yahoo! Finance declared that Dandelion’s innovations are “disrupting the geothermal energy space.” With Dandelion’s financing options, you can install a geothermal system for no money down and pay as little as $150 a month, it’s no wonder so many homeowners are making the switch.

Simply put: there’s never been a better time to upgrade your home to geothermal.