How Much Does It Cost To Operate a Geothermal Heating and Cooling System?

According to the US Environmental Protection Agency, “geothermal heat pumps are the most energy-efficient, environmentally clean, and cost-effective systems for heating and cooling.” They’re predictably low-maintenance, don’t burn expensive fossil fuels, and can reduce energy bills by 65% or even more.

Despite these net savings, homeowners are sometimes skeptical when they learn geothermal heat pumps use more electricity than the furnaces they replace. This guide will explore: 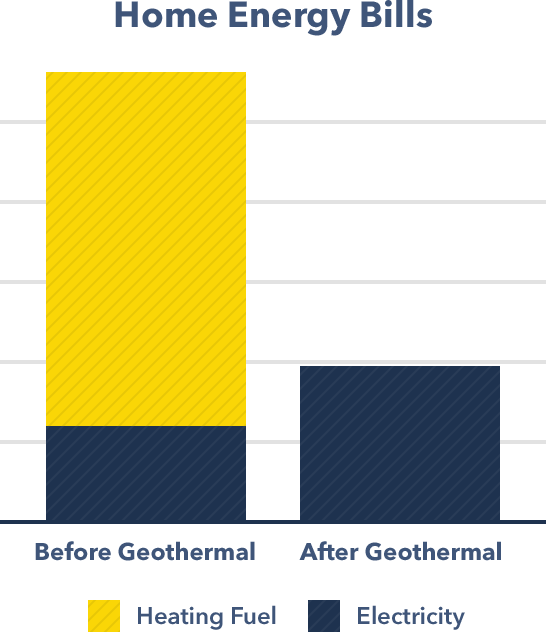 While a virtual consultation and site survey is the best way to get an accurate operating cost estimate, the following information will get you started!

The key difference between furnaces and geothermal heat pumps is the heat source being used to warm the home. A typical furnace creates heat by burning oil or gas in its combustion chamber, whereas a geothermal heat pump simply moves heat from the ground that already exists.

A furnace consumes a very small amount of electricity to power the fan, and other minor electrical components, but most of the energy added by a furnace is through combustion.

A heat pump, however, uses electricity to power the compressor, fan, and circulating pumps. These critical components enable the heat pump to move heat from the ground and bring it into the home through the vapor compression/refrigeration cycle.

You might wonder how geothermal heat pumps save homeowners money when they use more electricity than furnaces.

No Fuel Oil or Gas

Oil and gas pricing is subject to supply and demand and impacted by the political landscape. Geothermal systems don’t require fossil fuels to operate, safeguarding homeowners from rising heating bills. 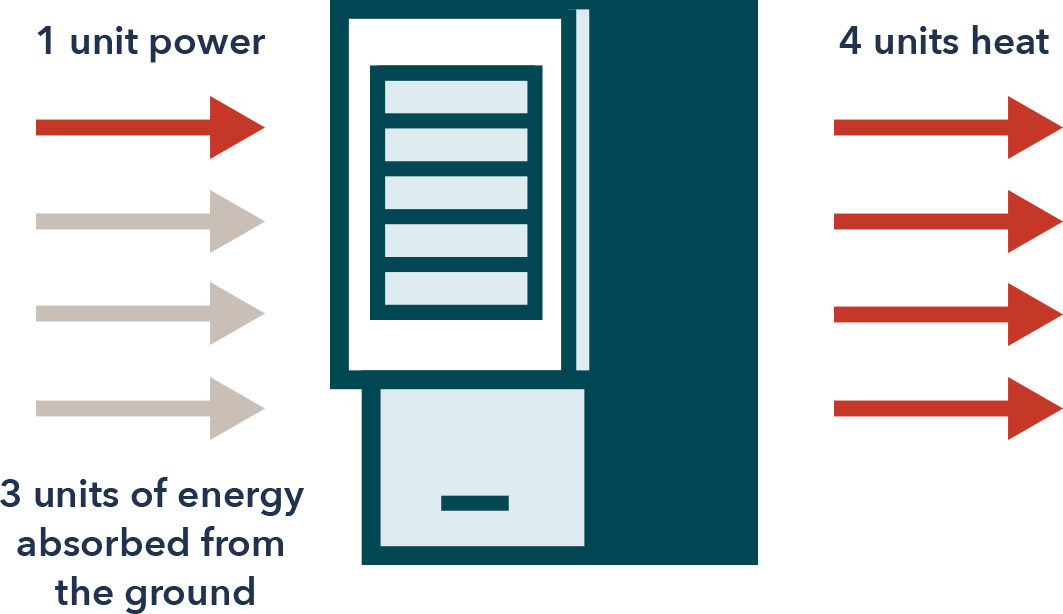 A brand new high-efficiency furnace might be rated 96% or even 98% efficient. That means for every 1 unit of energy used to power your furnace, .96 units of heat energy are supplied and .04 units are lost as waste. Some energy is always lost in the process of creating heat, and ALL of the energy delivered with combustion-based furnace comes from the consumption of a fuel source, whether it is natural gas, propane, or heating oil.

Because geothermal heat pumps don’t create heat -- they just transfer it -- they are on average 400% efficient. For every 1 unit of energy used to power your geothermal system, 4 units of heat energy are supplied. Only about one-third to one-fourth of the energy delivered in heating with a geothermal systems comes from electricity consumption -- the rest is extracted from the ground.


What kind of maintenance do geothermal systems require?

The Dandelion Geothermal system is designed to require as little maintenance as possible. However, there are some key things to ensure the system continues to run well.

Every three to six months: change the air filters. If you run the fan continuously, have pets, or live in a dust-prone environment, you’ll need to change your air filters more frequently. During installation, Dandelion sets your fan to run 15 minutes every hour. We recommend maintaining this setting and visually inspecting your air filters once a month. 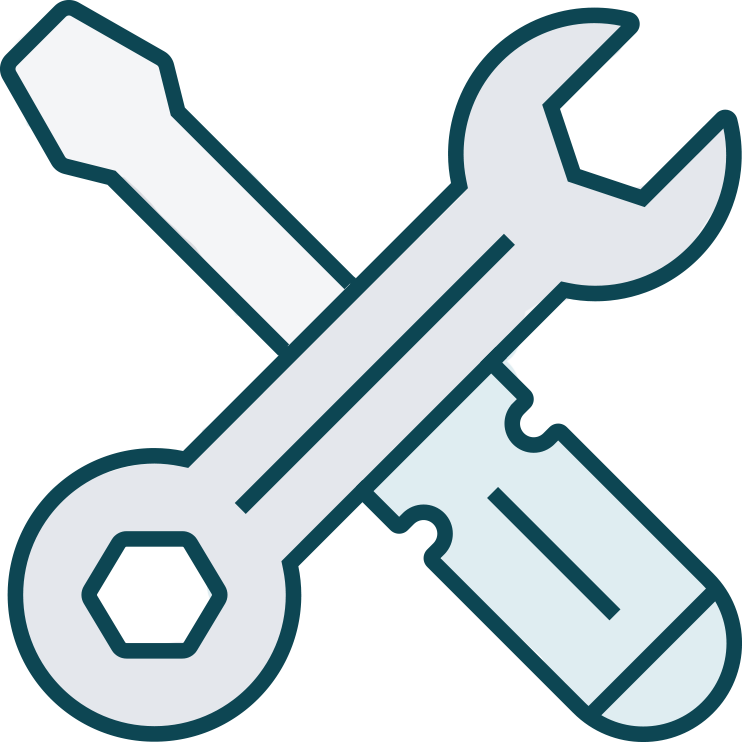 Every five years: have a qualified service technician perform a basic inspection of the system.

The ground loop itself is sealed and requires no maintenance. The pipes are made of an inert and extremely durable material—the ground loop will probably outlast your home.


How long do geothermal systems last compared to conventional equipment? 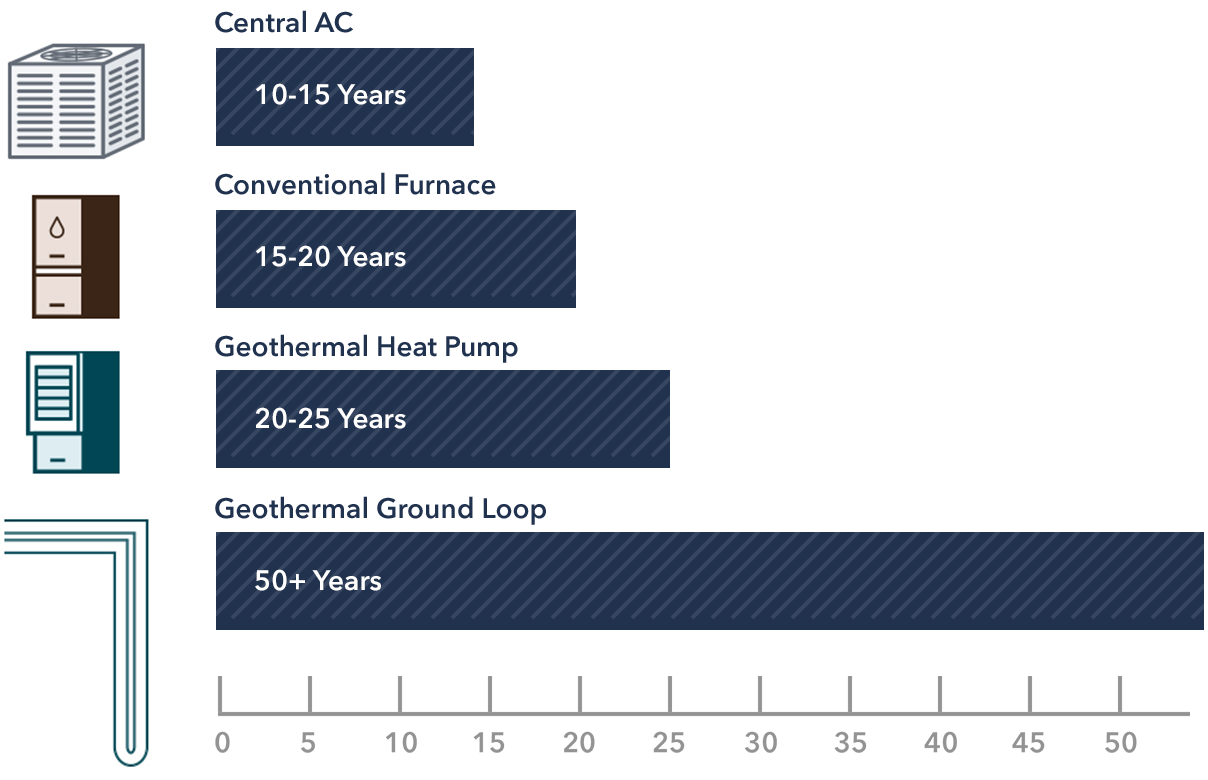 On average, conventional furnaces last anywhere between 15 and 20 years, while central air conditioners last 10 to 15 years.

Alternatively, geothermal heat pumps typically last 20 to 25 years, and the ground loops installed in the yard can last more than 50 years (even up to 100!).


Why do geothermal systems have longer lifespans than conventional equipment?

Geothermal equipment is protected both indoors and deep in the ground. As a result, geothermal systems aren’t subject to wind or weather and have even been called storm-proof.

But that’s not the only reason why geothermal systems last a long time. No combustion (fire!) within the unit means no flame related wear-and-tear and more moderate temperatures within the equipment, protecting from internal extremes.

How Much Will a Geothermal System Cost to Operate?

After getting geothermal, most homeowners see a substantial drop in heating fuel bills and a moderate increase in their electrical bills, leading to an overall reduction in monthly energy bills. Depending on the type of fuel your old furnace used and your heating needs, the overall savings could total into thousands of dollars over the life of your Dandelion Geothermal system.

These cost savings can be understood through a simple equation. 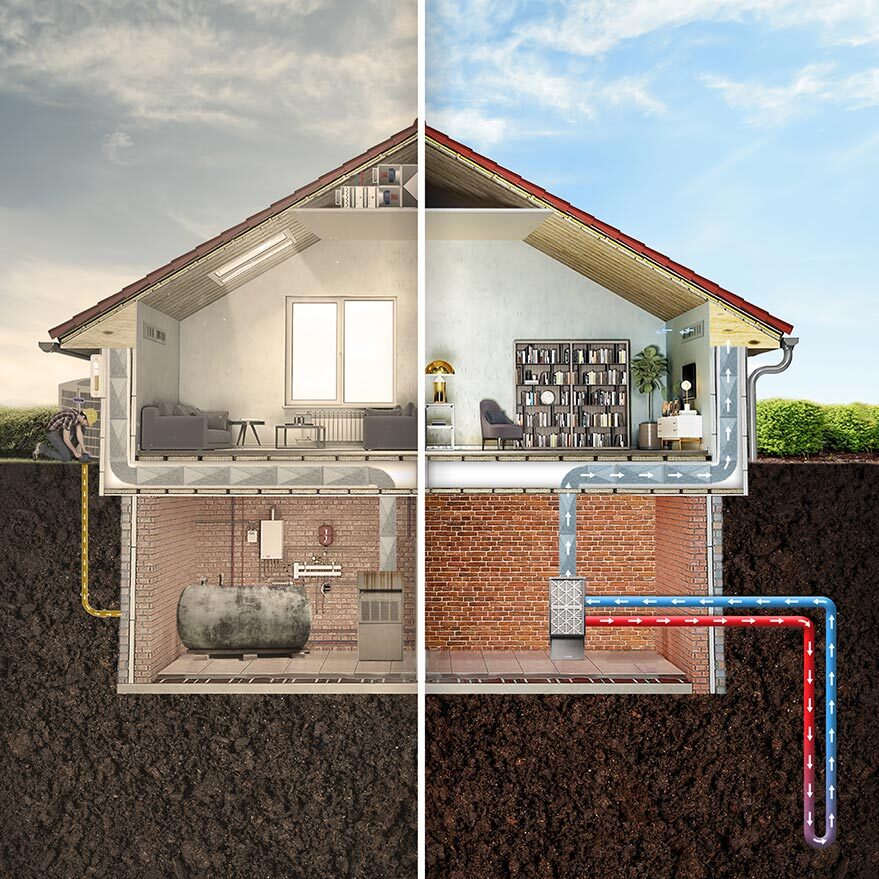 The greater a home’s square footage, the more energy that’s required to properly heat and cool.

Insulation is any material used to fill the spaces in your home to reduce and resist unwanted heat flow. Heat naturally flows in one direction-- from warmer spaces to cooler ones until no temperature difference exists.

During the winter, heat moves directly from heated living spaces to adjacent unheated areas and indirectly through walls, floors, and ceilings. During the summer, heat flows from the warmer outdoors into the cooler indoors. In addition, air can inadvertently enter and escape through a home’s cracks, crevices, and openings, especially around doors and window frames.


The greater a geothermal heat pump’s efficiency, the less electricity (and money!) needed to operate the machine. 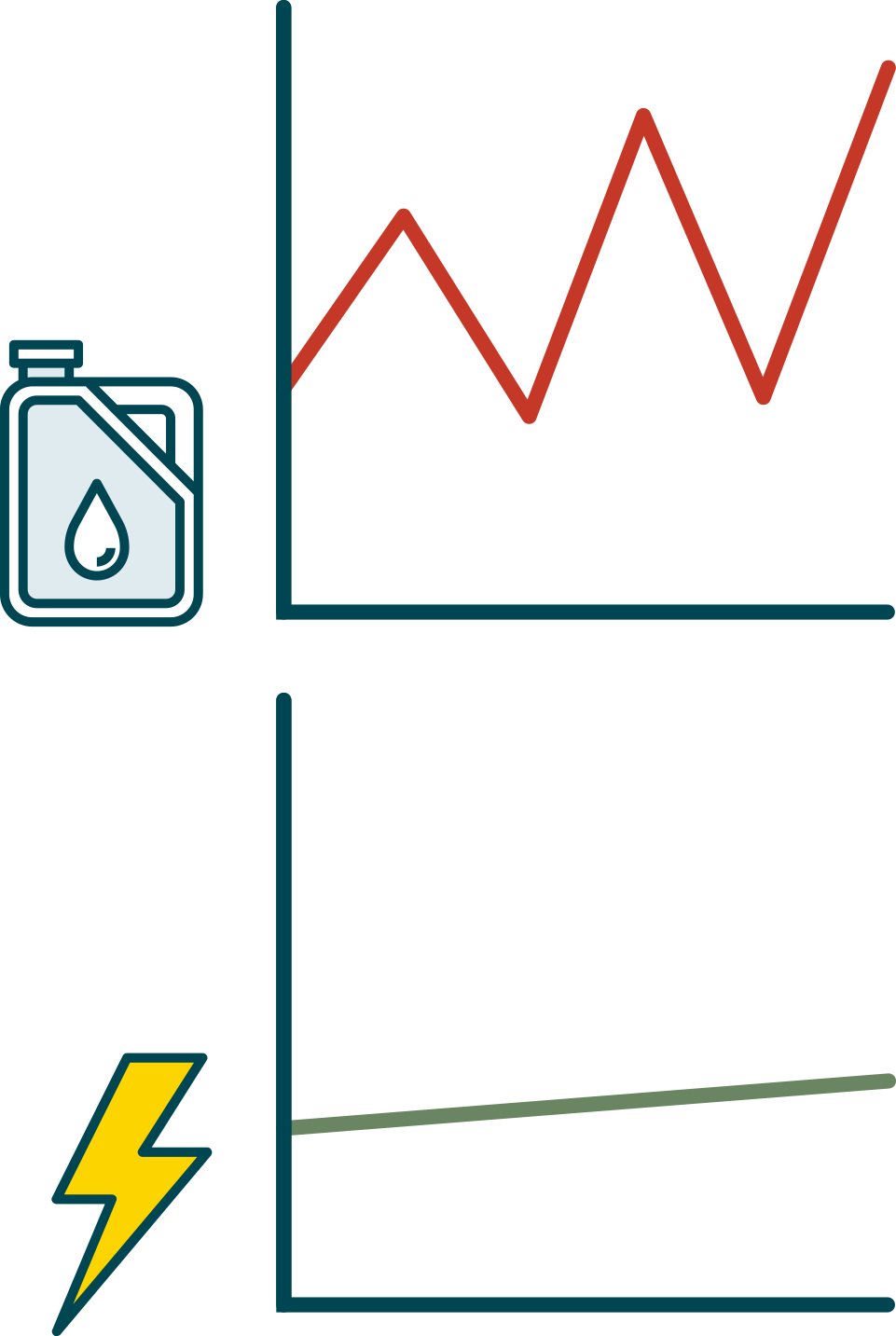 Historically, the rise in electricity prices has been slow but steady while natural gas, propane, and heating oil prices tend to be more volatile. 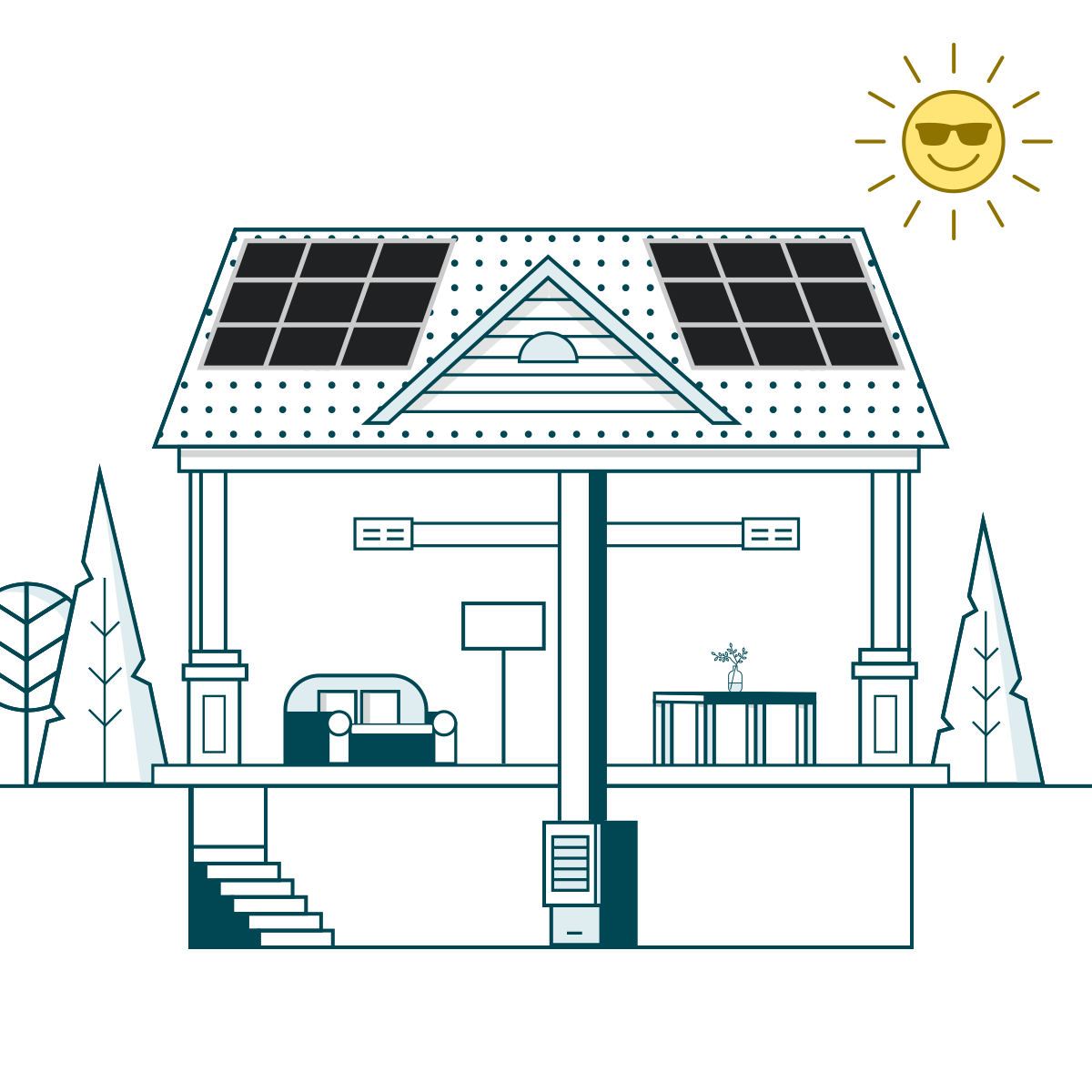 Electricity rates significantly vary based on the supplier, whether it’s a utility or an energy service company (ESCO). 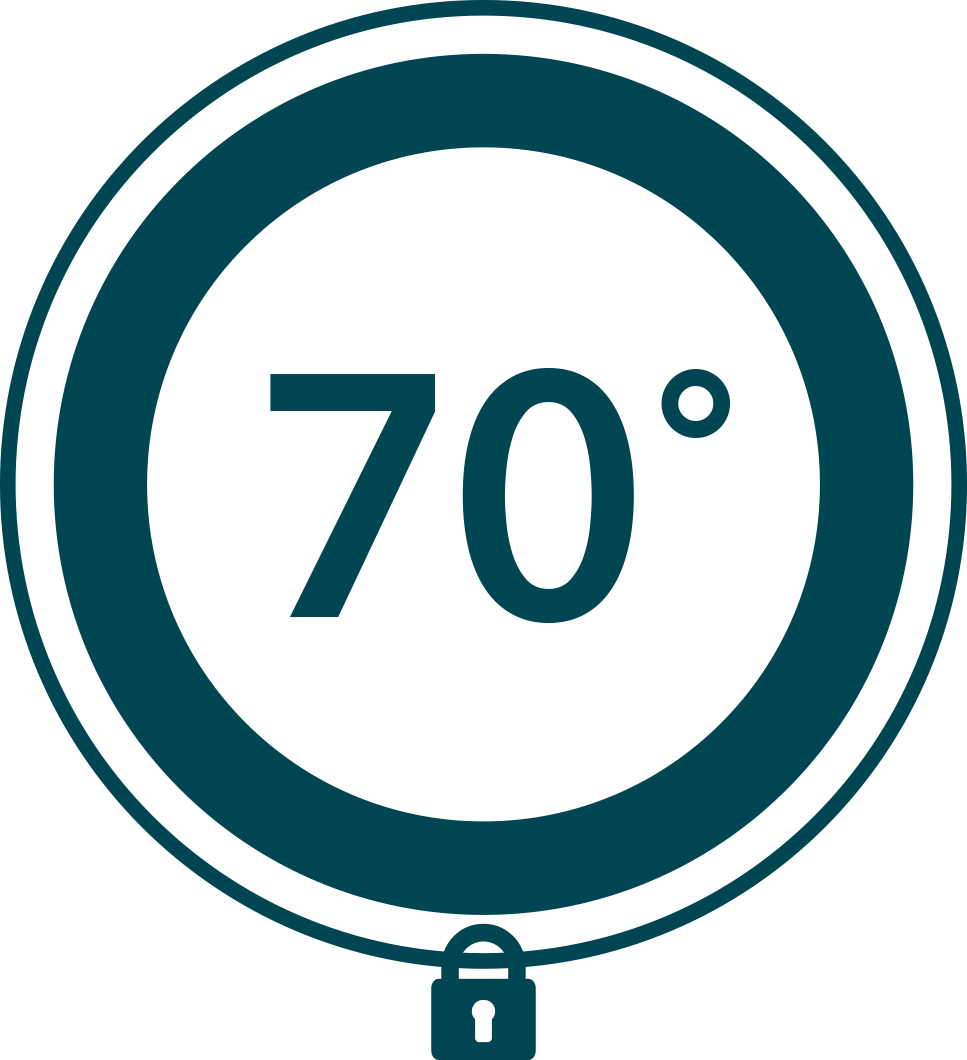 
Increasing and Decreasing The Thermostat

Many homeowners are accustomed to adjusting their thermostat if they plan to be away from the house or asleep. This practice, known as thermostat setback, often saves money and energy when operating a fossil fuel furnace.

A traditional heating system is typically oversized to meet the needs of the conditioned space, but unlike heat pumps, this doesn’t create a significant decrease in its operating efficiency. The oversized equipment, along with its extra capacity, is easily able to recover from any temperature setback and quickly warm the space upon the homeowner’s return.

This practice is detrimental, however, when operating a geothermal system. Unlike a furnace, a geothermal system is carefully designed to meet a home’s precise heating and cooling needs. In order to recover from a setback period, the strained geothermal system will likely need assistance from a supplemental heat source like an electric resistance heater. As a result, thermostat setback forces the geothermal system to frequently rely on expensive supplemental systems, unintentionally and ironically increasing the average cost of operation.

A geothermal system will run most efficiently when the thermostat is kept at a single temperature set point throughout the day.

The temperature on your thermostat will impact how much electricity is used to operate the geothermal system. We recommend homeowners set their thermostats around the same temperature as their previous system. No matter the source—fuel or geothermal—it costs more to heat a home to 75°F than 70°F.


Dandelion Geothermal’s heat pump has different heating stages for different heating needs: part-load, full-load, and Auxiliary (AUX) Heat. AUX Heat activates when the demand for heat is highest, providing supplementary heat to keep your home comfortable. Some geothermal heat pumps do not use AUX heat at all or include it as an optional add-on when installing the system.


Some examples of when AUX Heat may activate:

Your thermostat was set to 60°F while you were on vacation. Now that you’re home, you adjust it back to a more comfortable 70°F. A change in thermostat settings greater than 5°F can trigger AUX Heat.

A cold front arrives, rapidly dropping the temperature outside and pulling more heat from your home. A sudden drop in air temperature returning to your heat pump may trigger AUX Heat. 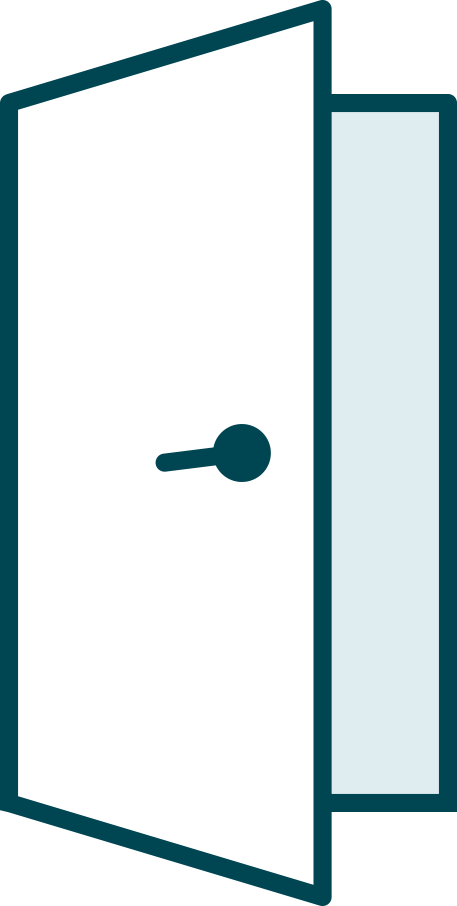 Someone left the back door open. Again. Now it’s 62°F inside and your thermostat is set to 70°F. Like the previous two, a difference between the air temperature and the thermostat setting greater than 5°F may trigger AUX Heat.

AUX Heat will likely activate intermittently when the outdoor temperature drops below 15°F, though this depends on how efficient your home is. The American Society of Heating, Refrigerating and Air-Conditioning Engineers (ASHRAE) reports that various areas of New York experience temperatures below 15°F around 1.5–5% of the year, or around 130-450 hours total. If AUX Heat turns on during this time, it will do so in short runs and not the entire duration.

To maximize geothermal savings, it’s important to minimize the use of AUX Heat. AUX Heat is a normal part of heat pump systems and necessary at times, but it uses much more electricity than the other heating stages. Changes in room temperature or thermostat set points greater than 5°F are the most common trigger for activating AUX Heat.

Air Conditioning Use Prior to Geothermal

No AC Prior to Geothermal

In the summer, geothermal heat pumps use electricity to capsure the warm air in your home and transfer it into the cooler ground. Homeowners who previously used no air conditioning prior to installing geothermal may notice a moderate increase in their electric bills.

Geothermal heat pumps are more efficient and use less electricity for cooling than even hyper-efficient central AC systems. That’s because standard AC units remove hot air from your home and release it into the hot outdoors, whereas geothermal heat pumps move the hot air into the 50 degree ground where it’s more easily accepted. A typical central AC may have a SEER rating of 14-16, while a geothermal heat pump system can have of 15-20. Because of this increased efficiency, homeowners with window units, wall units, or traditional central AC prior to installing geothermal may see their electric usage decrease in the summer.

What Does Dandelion Geothermal Cost?